skip to main | skip to sidebar

Video of Earthquake Clouds over Japan

VIDEO OF EARTHQUAKE CLOUDS OVER JAPAN
Posted by Questioning All at 11:00 AM No comments:

Look at this picture of the Gulf of Mexico


Look at how the clouds have distinct clear lines going through it, also how the puffy clouds look with straight lined clouds within them. The washboard clouds along the coast of Texas and Louisiana.


In my opinion, this shows a large quake to come down in that area.
Posted by Questioning All at 9:32 AM No comments:

Please Note, I have not been inserting the Earthquakes of where the clouds I have inserted have happened, but they have been happening.  Sorry, I have had other things going on.  But you only have to look at the USGS site and the EMSC site and the Australian quake site, to see the Earthquakes.


Very Odd clouds around the Gulf of Mexico but the straight lined one wrapping around Florida, is the most interesting.

The New Madrid, up and down the line encompassing many states

Southern Tip of South America going down to the Antarctica

Can you say the Whole European area and Med?  From Mid East through Italy down to Northern Africa - EQ clouds throughout the whole area, can't just specify one place.

There are more pictures I have to go with this one, but I am holding off right now - This is Antarctica - and right below this one is a Huge Split - But this is the time of year for the Ice Melt, as they are entering the "Summer Months".  There are two different areas of Antarctica that has peaked my interest, where it does not look like Temporary Ice Melts - but actually REAL Splits of the Continent.  Until I am sure, what it is and what is going on, I am not going to insert those pictures, as it may just be Ice melt.  Though I have not see splits like these in previous Ice Melts.  This picture shows EQ clouds right at one of those splits, so it may just be the movement of Ice causing the clouds waves.

This is the split right at the above Cloud waves, so I believe it is the movement of this ice .... causing the waves.

Posted by Questioning All at 9:27 AM No comments: 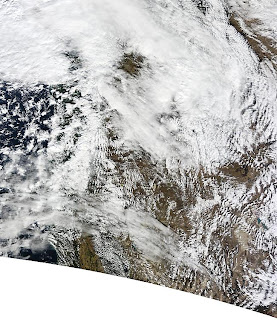 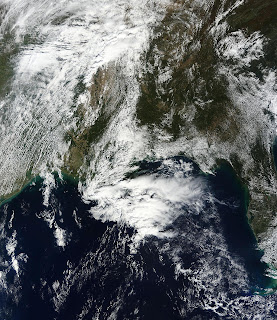 Iowa - and the surrounding states

Chile - with the Cotton Candy Clouds and push away -

North East United States - something is definitely going to be causing some shaking around there - seems to me it would be a 4+   There are push back clouds besides large rippled clouds. 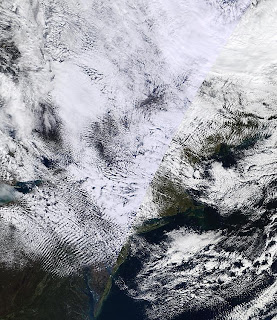 I would like to clarify, when I capture pictures, the pictures are from Flash Earth, which is at least one day behind.  I am happy, they are at least updating the clouds once more on a regular basis.
Black Sea Area and Surrounding Countries - Turkey, Georgia,  Romania - A very interesting X of straight lined Clouds over Georgia.

Gulf of California - Clouds are from 10/21/10 Where 6.7 Quake Hit on 10/21/10 - Showing what the clouds looked like.  It had the Straight lined clouds and the very puffy cotton ball clouds (which I find around the larger quakes - also they may be around the area, a long time before the quake actually hits)

Italy and the whole surrounding area to Greece - Looks to me, some real shaking will be happening.

UPDATE 10/23/10  *there have been so many Earthquakes overnight in this area - I am not going to list them all, I am putting just a few in.*


North Island of New Zealand and Northern Vicinity - makes sense, since there are so many quakes happening just North of there.

China - Southern going into Myanmar - seems to me a 5+ is on its way.

Extra Picture - It is the Typhoon Megi

Posted by Questioning All at 11:36 AM No comments:

I have to say there are some very intense looking Earth Quake Clouds around the world - some in some interesting areas, besides EQ clouds being almost everywhere.

California Coast - these are some major EQ clouds in my opinion, has a push away, besides small and large ripples within the push away clouds.

Wisconsin and Lake Michigan down into Illinios

Iceland - some major rippling off the East Coast - 4+

New Zealand - Looks like they will continue to Shake

Some Real Push Away with ripples and voids off the Coast of Spain, 5+

Now, this is an interesting spot - Southern Ireland into Bristol Channel - but the ripples are definitely there.

Slovakia, Czech Republic all the way to Austria

UPDATE 10/23/10
ANOTHER UPDATE 10/24/10
Little Tasmania is STILL Showing Movement - I haven't seen anything from it yet, but I am definitely expecting something there! Has consistently had EQ clouds over the area for about a month now.

Major EQ clouds over Greece and they extend all the way to Northern Africa - The Whole Med Area basically seems to be showing Earth movement.  5+

Posted by Questioning All at 7:15 AM No comments:

Posted by Questioning All at 6:52 AM No comments:

The Whole Upper Eastern Area of U.S. down to Ohio

Posted by Questioning All at 7:59 AM No comments:

Please see this post I made last month (March 2010) - it had both Sumatra and Baja on it. I have put Baja in quite a few times here, but am using this post about it, since it also has the Sumatra post.

I have been watching and studying clouds for a little while now.
Clouds show Earth movements days before a quake happens.
It is a vibration of movement, which can be seen and identified by satellite.

A few articles about Clouds and Forecasting quakes:

Postings will be of pictures of Earthquake clouds and at times magnitude forecast from the clouds.

My first post on blog - Pictures and Predictions before quakes had occurred.

Links to sites which are important for Earth movements:

The USGS site for Earthquakes:

The USGS site does not show European, Australian or Canadian quakes -

The Canadian Site for the Earthquakes

Webcams for Watching For Tsunamis

Please see the Video at the Bottom of the Blog!

It is about the Triangle of Life - do NOT get Under something - get Beside it!

Also - Please have stored water and supplies for at least a week, no matter where you are.

Our Earth is Changing - that is fact!

Be Prepared - Know what to do!!

Don't expect others to do for you - DO FOR YOURSELF!!